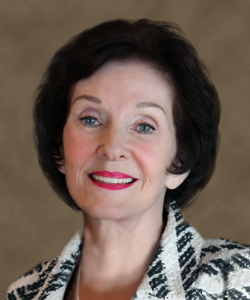 In a career that spans nearly four decades, Sandra Thompson Herman has blazed countless trails that have paved the way for dreamers to become doers.

In 1975, when she was still in her 20s, Sandra designed Louisiana Department of Culture, Recreation and Tourism and served as the first cabinet-level Secretary, leading the department from 1976 through 1978. In 1979, she became the first woman to run for Louisiana’s Secretary of State, defeated by a narrow margin.

Sandra embraced the state’s oil boom in 1980, launching a trucking company to serve the industry. Over the next 15 years, she grew the business from a small fleet of three trucks to 12, serving parishes throughout south Louisiana.

She returned to state government in 1996, serving as the Executive Director of the Louisiana Department of Natural Resources, Atchafalaya Basin Program. In the three terms she led the project—two under Governor Mike Foster and a third under Governor Kathleen Blanco—Sandra secured and managed $83 million in state funds to match Corps of Engineers $250 million, and she led the task force in developing and implementing the eight-parish master plan for the 800,000-acre basin.

More recently, she served as Strategic Advisor & Political Liaison for Four Seasons and World Trade Center Enterprise on New Orleans’ Riverfront, for which she collaborated with city and state government leaders, assisted in creating and executing political strategy to garner public support, drafted legislation and assisted with the project’s public relations efforts.

Her leadership in the public sector has included serving as president of Louisiana Center for Women in Government and Business Corporate Board and vice president of the board of the French Market Corporation.  She has also served as a board member of the Louisiana First Foundation and Louisiana State Museum, and a member of the New Orleans Tricentennial Commission and Gallier Hall Restoration Committee.

In the private sector, Sandra has devoted her time and talents serving as president of the Ballet Resource and Volunteer Association and she is a founding member and president of the Club of New Orleans and the New Orleans Entertainment Coalition. She has also served on the board of directors for the Louisiana Museum Foundation and Jefferson Performing Arts Society.

In March of 2020, Sandra donated her Legacy Papers to the University of Louisiana at Lafayette’s Edith Garland Dupré Library in cooperation with the Kathleen Babineaux Blanco Public Policy Center. The documents will be made available to students, professors and the community leaders for research, providing a window into Louisiana political life, especially that of women.

Sandra earned her Bachelor of Arts degree at Southeastern Louisiana University, where she was an honors graduate in government, and earned her Master of Business Administration at Louisiana State University. She is married to Russ Herman, and the couple are parents to five children and seven grandchildren.