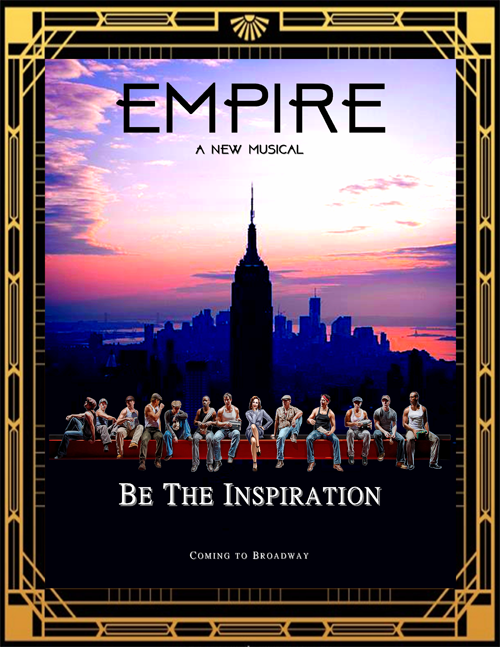 For more information about Empire the Musical, contact Sandra Thompson Herman at

Empire is the story of the amazing people who dare to go up when the whole world is down.

In 1928, New York Governor Al Smith is the Democratic candidate for President and he appoints his top advisor Frankie Peterson as his campaign manager. On November 6, 1928, Al Smith loses the election and Frankie is blamed for the loss by Al’s business partner John J. Raskob. On the night of the loss, John comes up with an idea to give Al the legacy he deserves. Defying John’s objections, Al enlists Frankie to manage the new project. Over the next 11 months, Frankie puts all the pieces in place to ensure success, including hiring the best architects in the city and securing their top onsite architect Michael Shaw. October 1929, Raskob announces they will build a monument to a man of the people, the tallest building in the world, the Al Smith Building. Within days, the stock market crashes and the whole world is shrouded in unemployment, hunger, fear and despair.

As the Great Depression sets in, the Press declare Al’s venture a capitalist folly. Janet Arthur and the powerful 5th Avenue Association mount daily protests at the site and lobby the Mayor to keep such an egregious eyesore off their avenue. The Mayor orders Smith and Raskob to halt the project. The team decides to hire more than 3,000 immigrant workers hoping it will sway the Mayor in their favor. The mayor remains defiant against them but Frankie persuades him to let them move forward guaranteeing to deliver a one of a kind 100 story building to his city by May 1, 1931, an impractical deadline of 14 months that leaves no room for error.

The men are hired and construction begins. The workers include Ethan O’Dowd, a new father and leader of a rivet gang who wants to provide a better life for his family; Bucky Borne, a young and ambitious waterboy who wants to be important and the Mohawk Indian Sky Walkers, led by Pomohac who wants to pass on his trade to his children. Bucky sets his sights on the dangerous practice of walking the high beams with the Mohawks. Pomohac agrees to let him walk the high beams i f he proves to be worthy. The construction reaches 20 stories, over 200 feet above the city, when a tragic accident occurs and a worker is lost.

The project falls precariously behind schedule as the Press and the 5th Avenue Association ramp up their attacks. Michael decides that his safety standards failed and he can no longer lead the team. Without leadership and facing increased scrutiny, Raskob blames Frankie for all the problems and the workers turn against Frankie as they no longer want to risk their lives for Al’s legacy. With the deadline looming, Smith and Raskob fear they are going to fail again. Raskob announces they need a new man to lead the project. Frankie’s frustration boils over as she proclaims “what you need is a woman and that woman is me.” Raskob relents and Frankie takes over. She must confront Janet Arthur, the Press, and get Michael Shaw back on board. With time running out, Frankie needs a plan to get the project back on schedule and convince the men that the legacy of this achievement belongs to all of them.

Over Eighty eight years ago, thousands of men were assembled to build higher than ever before. Their hard work, daring, and determination captured the heart of a nation. What started as a tribute to one man quickly became the Empire State Building, a timeless tribute to the hopes and dreams in all of us.

For more information about Empire the Musical, visit www.EmpiretheMusical.com.